Transforming U.S. energy systems away from coal and toward clean renewable energy was once a vision touted mainly by environmentalists. Now it is shared by market purists.

Today, renewable energy resources like wind and solar power are so affordable that they’re driving coal production and coal-fired generation out of business. Lower-cost natural gas is helping, too.

I direct Colorado State University’s Center for the New Energy Economy , which works with states to facilitate the transition toward a clean energy economy. In my view, today’s energy market reflects years of federal and state support for clean energy research, development and deployment.

And, despite the Trump administration’s support of coal, a recent survey of industry leaders shows that utilities are not changing their plans significantly.

Over the past 24 years – under Presidents Bill Clinton, George W. Bush and Barack Obama – the United States made substantial investments to promote research, development and deployment of clean energy technologies.

Federal agencies provided funding for research and development as well as tax incentives. States used renewable portfolio standards , which typically require that power providers supply an increasing percentage of renewable energy to their customers, to promote deployment of green energy.

This one-two punch led to innovations that have transformed U.S. energy markets. In the last eight years, utility-scale solar costs have declined by 86 percent and wind energy prices have fallen by 67 percent.

Natural gas prices, which were highly volatile and often spiked in the early 2000s, have now stabilized at much more affordable levels. They are likely to remain so as production methods improve and sources expand.

The Trump administration is resisting this trend, repealing the Obama administration’s Plan and proposing subsidies for coal-fired power plants. In doing so, it has also eliminated programs that were designed to help coal-dependent communities weather the energy transition.

But these reversals can do little to change underlying market forces, which are driving innovation, closing coal plants and promoting investment in clean technologies. 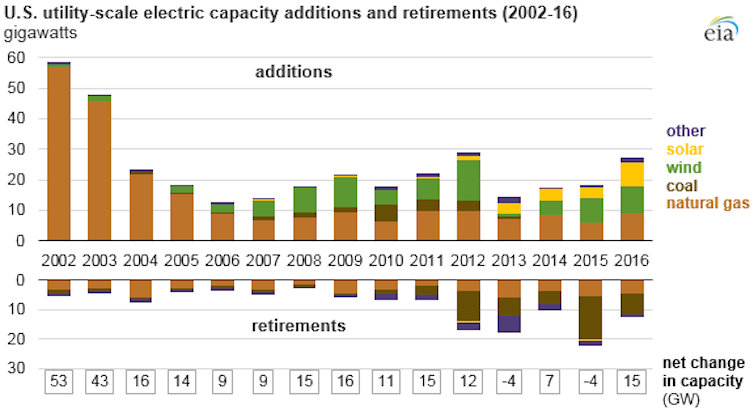 Why is their outlook so divergent from what’s happening in Washington, D.C.? The answer is a result of multiple market dynamics within the energy industry.

– Markets favor low-cost energy. Currently natural gas, wind and solar are the lowest-cost resources available to produce electricity and are pushing out coal as a source of power.

– Markets emphasize the long view. As utilities look at aging coal plants that are providing decreasing value to their systems, they are making multi-decade and multi-billion-dollar decisions on investments in power plants and infrastructure to replace coal .

– Markets loathe uncertainty. The Trump administration’s policy reversals and tweets are an unstable foundation upon which to build a corporate strategy.

– Wall Street is helping utilities finance billions of dollars of investment. To ensure access to low-cost capital, they want to cite low-risk investments. Coal represents a high-risk investment from both a pollution and a resource standpoint. In 2016, 44 percent of the U.S. coal supply came from companies that had declared bankruptcy . The resource is simply too risky for investment markets.

There are, of course, renewable energy skeptics. Detractors argue that wind and sun are intermittent sources – not reliable 24 hours a day as a resource that can be turned on and off in response to power market demands.

But as these resources expand geographically, they create an integrated system of renewable generation that produces a consistent source of electricity.

States in New England , mid-Atlantic and the Midwest have integrated electricity systems run by independent system operators that deliver power over large geographic areas, enabling them to balance energy output across their territories.

Now the West, too, is starting to integrate into regional transmission systems powered largely by clean sources.

For example, in Colorado, Xcel Energy recently submitted a plan to regulators to replace coal generation with renewables and natural gas. This shift will bring its Colorado mix of power up to 55 percent renewable by 2026 while reducing associated emissions 60 percent below 2005 levels – all without the EPA’s Plan or a renewable mandate. Xcel is also finalizing plans to join the Southwest Power Pool , a transmission market that includes nine other states.

Further, advances in energy storage are decreasing the intermittency of renewable generation and offering utilities a buffer between energy demand and energy supply.

With storage, utilities can deliver energy when the system needs it. They also can meet spikes in demand with energy from batteries, which reduces the need to build expensive generation that is needed only to meet peak power demand.

Innovation is also giving utilities and consumers new ways to manage their power needs. More energy-efficient buildings and appliances, and the ability to manage power requirements through an intelligent grid, will make it possible to do more with less electricity, lowering energy costs for everyone.

I expect this dramatic transition to become more pronounced over the next 15 to 20 years. U.S. energy production and consumption will continue to evolve toward a cleaner, more stable and more intelligent system.

This is good news for U.S. energy consumers and for efforts to protect our climate, environment and economy for future generations. Renewables on the Rise, What it means for Energy